The name for our city – ‘Ventura’ – is shorthand for the official ‘San Buenaventura.’ Dropping the five syllable label for the diminutive apparently came early in the city’s history. Spanish-era records often refer to the San Buenaventura River as the Ventura River, and the Spanish term for the local Chumash tribe, still in use, was Ventureno.
What is now Ventura was called Shisholop by the native people, apparently referring to the town being “in the mud” near the estuary.
The first Spanish mariner to arrive, Juan Rodriguez Cabrillo, called the place El Pueblo de las Canoas (The City of the Canoes) in 1522 for the ubiquitous Chumash watercraft they encountered.
Originally planned as the third mission, supply problems delayed the founding of the Mission San Buenaventura for over a decade. Meaning “good fortune,” Bonaventure was an accomplished priest and contemporary of St. Francis and St. Thomas Aquinas in the 1200s who eventually earned sainthood status. As the Franciscan order founded the Mission system they naturally honored one of their own when Mission San Buenaventura finally became operational in 1782. 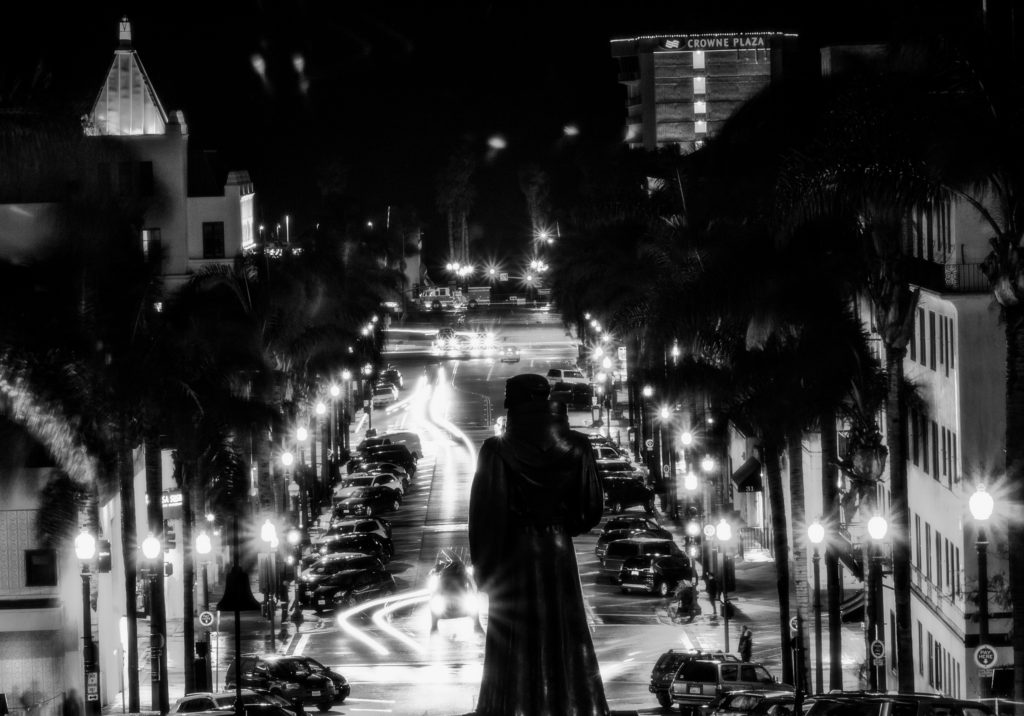 Incorporated as San Buenaventura in 1866, no precise date can be found for the popularization of the of the shortened moniker. It is perhaps instructive that the city was primarily Latino through the 1850s, but with the influx of Yankees, European and Chinese immigrants the use of ‘Ventura’ becomes the standard.
Some writers have suggested the split from Santa Barbara County and the formation of Ventura County in 1873 (first proposed in 1859) hastened the name shift.
Others have suggested that the arrival of the railroad in 1887 necessitated the abbreviated name for ease in printing schedules, yet the city’s first newspaper, founded in 1873, was the Ventura Signal.
A working class town through much of its history, perhaps Venturans preferred the utility of ‘Ventura,’ or ‘Vento,’ to the more romantic but time-consuming San Buenaventura, pronounced in a Spanish accent of course.
[If Venturans can be criticized for laxity here, consider the case of Los Angeles. What is now ‘LA’ was originally ‘El Pueblo de Nuestra Señora la Reina de los Ángeles del Río Porciúncula!’]
For further reading see:
Judith Triem, Ventura County: Land of Good Fortune. (Windsor 1985).