It’s not often you get to meet a real Elf. And when you do, special things happen. It’s a magical experience. And Visit Ventura’s Elf — well step to the side Buddy the Elf (maybe Will Ferrell) — she is an Elf like no other. For one thing, you learn a whole lot. 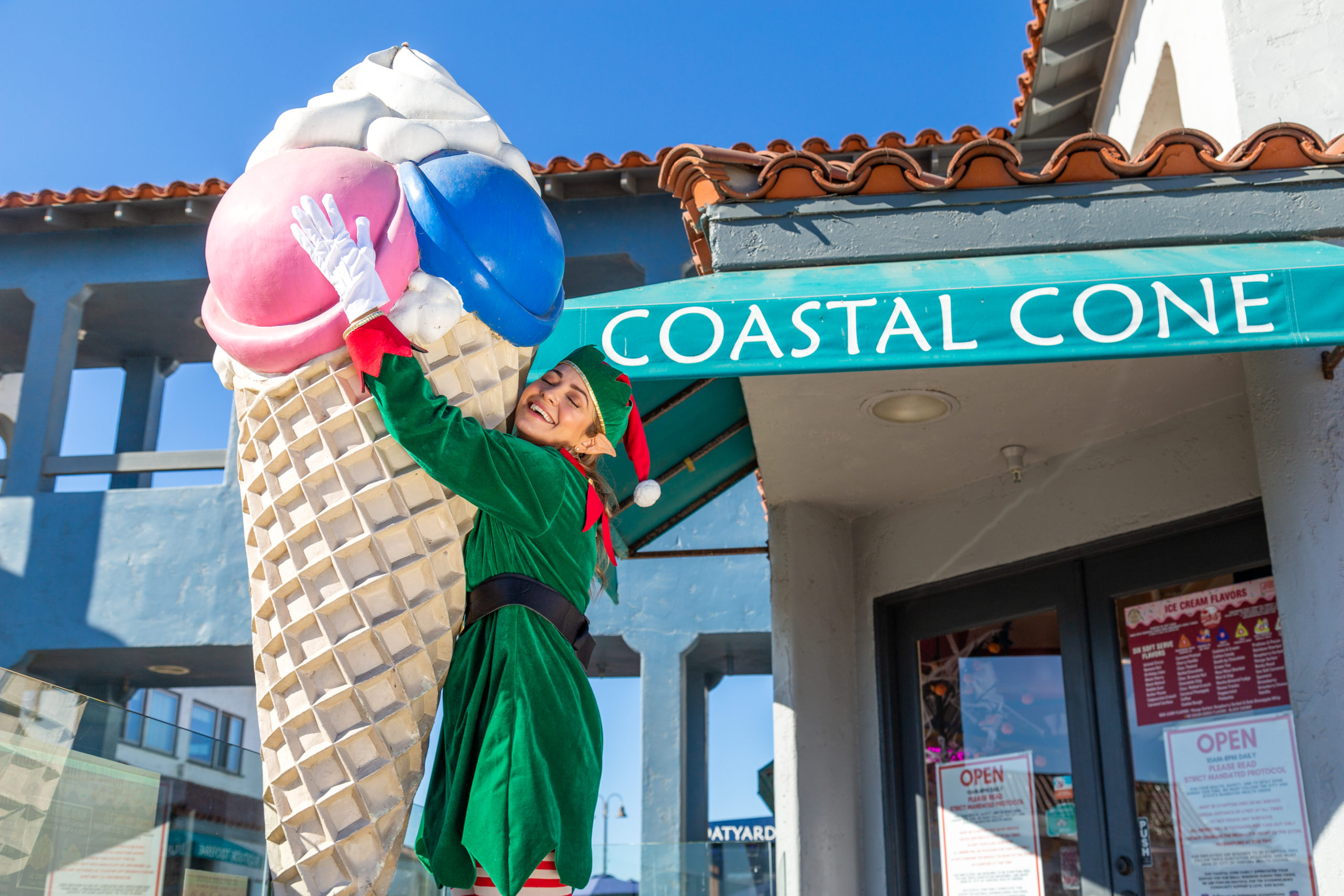 For starters, when the Visit Ventura Elf isn’t the Visit Ventura’s Elf, she’s Briana Garcia. Briana owns a lovely shop on downtown Main Street called Tiki Girl. Because she’s a businesswoman (she built Tiki Girl from scratch by herself), she understands how important it is to support small local businesses. Without help from the people in their town, small local businesses can’t make it. Maybe that’s why when Visit Ventura does their annual Elf Giveaway (five years running), Briana doesn’t just immerse herself in her Elf role. She becomes an Elf. It’s fun to watch her transform. When she puts on her Elf outfit, it’s like watching Superman go into a phone booth, only he comes out cheekier. Spend a little time with Visit Ventura’s Elf, and you learn that she is a study in contradictions. For one thing, she is spontaneous, with a whole lot of planning thrown in.

Once, when the Visit Ventura team was filming her in Passport Habits, she looked around, threw herself on the ground, and rolled herself up in a carpet. Elf in a blanket. That one still makes her smile. The Elf considers the moment as an actor considers a role in a particular movie. “Everybody loves that one,” she says. Did you do it spontaneously? Her face scrunches. She makes a lot of faces. She practices some of them (read on), but others just come naturally. “I think I did! I’m always trying to look for fun things to delight people!” Yes, the Elf really speaks in exclamation marks. Her sentences come in short cheery bursts, though when she gets excited her sentences run over each other, like reindeer in a real hurry. Take her recent visit to PizzaMan Dan’s where she teamed up with, well, PizzaMan Dan (who has a bit of Elf in him too). What did she do at PizzaMan Dan’s? “Everything! We got to make a pizza, and we got to ride in his pizza corvette, and we got to deliver his pizzas, and…” Does the Elf take her job seriously? Surprisingly, yes. Very, very yes. When she first heard that Visit Ventura was looking for an Elf, well it wasn’t just a little light that went off. “I just knew that was my calling in life, to be the Visit Ventura Elf.” Rumor has it you were, well, a tad persistent (it does not do to insult an Elf) in your pursuit of the job. Thankfully, it’s only a small humpff. “I didn’t know if they were taking me seriously. So I really tried to get my point across. I think they really realized my passion.” Now that she is THE Elf, she is not resting on her laurels. What you will see when you watch Visit Ventura’s Elf in the Grand Prize buildup to Christmas is not all fly-by-the-seat-of-your-striped-pants. “I practice the faces I make. I try to come up with new hand gestures. I daydream in Elf.” Now she’s kind of famous. Kids (and kids-at-heart) stop star-struck in the street. Women stop her in stores (“Love the shoes). Her parents would rather talk about her Elfing than her business. Her grandmother once sent her a gift of three boxes. “Each one had an Elf in it.” You could say that Elfing has infiltrated her personal life, Elfing blurring back and forth. Almost exactly a year ago she was working in the store when her boyfriend called. He owns his own businesses (Sin-Min) and he had a booth at the Findings Market Street Fair in downtown Ventura (for Small Business Saturday; another worthy Elf-in like cause). He asked if she would come down and watch his booth while he played with his friends’ band that was playing at the Street Fair. “He said, ‘Why don’t you wear your Elf outfit? It’ll be really festive’”. Next thing she knows, he’s singing. She’s never heard him sing. “I hear the song he’s singing and then I saw these people in clear plastic ponchos and then I knew it was a flash mob.” Oh, you can fool an Elf. The song was “Let’s Stay Together.” Next came the marriage proposal. Sometimes it’s a very, very happy thing to see an Elf cry. And now the memory makes the Elf smile wide. The Elf has a smile that starts from deep inside and moves to your insides. Only a real Elf can smile like that. “I just like to make people happy.” No more noble — or Elfin — aim.     Shopping, dining, hiking, beach-going, beer-quaffing, wine-tasting, and all manner of fun in the sun (because that’s what Ventura does best). Want to know (almost) everything about Ventura? Please order our FREE Ventura Inspiration Guide here.

Why Small Business Saturday should be your new favorite shopping day.

What Does Visit Ventura Do?

Shop Ventura, Save Ventura. Small Business Saturday is this Saturday.