Conching in 2020 in Ventura

The sound will ride on the wind, as it has now for five years running. If you’re anywhere near Soter Point at Marina Park in Ventura at noon on New Year’s Day, it will stop you in your tracks and possibly raise a goosebump or three.
“It’s akin to blowing a trumpet, but without quite as much control,” says Jimmy Harvey, who first lent his lungs to the now annual New Year’s Day conch blow two years ago. “The conch is more primal and connected to the past.”
Like most things primal, the New Year’s Day conch salute is straightforward. Folks begin to gather at about 11:30 am at the mermaid statue at Soter Point near the mouth of Ventura Harbor. Well wishes and conchs are distributed. Up to the lips the shells go.  At noon, the New Year is welcomed in inimitable style.
The New Year’s Day conch salute is the brainchild of local resident Kenny Walters. 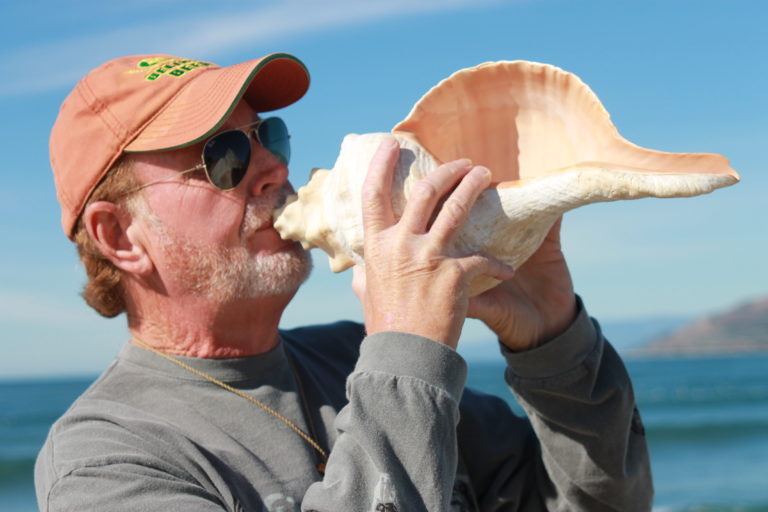 “I first got the idea to blow after seeing conchs being blown in Belize,” says Walters, who decided to assemble a group of ample-lunged friends on New Year’s Day for his own good reasons. “It’s such a special sound, and we were going through the drought, and I thought it might help in the universe.” Walters smiles. “The drought lessened. I’d like to think we helped.”
Conchs aren’t something everyone has handy, but Walters, who also utilizes the conch’s sonorous sound in his tiki band the CocoKnots, is an adaptable fellow, collecting conch shells at swap meets and yard sales. The annual conch blow draws about a dozen conch blowers, but the numbers are eking up each year, and Walters figures it’s wise to be prepared.
“Kenny usually has extra conchs at these things for people to give it a try,” says Harvey, who was fortunate to inherit a hand-me-down conch from Walters (along with other conch enthusiasts, Walters and Harvey have also set the heavens ringing in locales as far-flung as Joshua Tree and the summit of Ojai’s Sulphur Mountain).
Blowing a conch isn’t the easiest thing, but it isn’t particularly hard either; especially when lungs are teamed with enthusiasm and, well, a team. Safety in numbers. Think elementary school horn section.
“It takes about all you’ve got to get a good solid consistent tone, and concentration is required to begin and end with the other conchs,” says Harvey, who, wisely doesn’t take anything too seriously, including conching in the New Year. Harvey grins “There’s always a friendly competition to blow loudest and longest — without passing out.”