Amgen Tour of California announced the final route for 2019

by Visit Ventura Featured photo by Wade the Giant

Today Amgen Tour of California organizers announced the final route specifics for the 14th edition of America’s premier professional cycling stage race (May 12-18, 2019), and Ventura will witness a colorful smear (riders move fast) of heart-pumping adrenal action. On May 16th, some of the world’s best cyclists will sweep into — and out of — Ventura. The epicenter of everything will be the Ventura Fairgrounds, where spectators can see the women’s stage start (12:10 pm) and finish (roughly 2:50 pm), and the finish of the fifth stage of the men’s race (which begins in Pismo Beach) at an estimated 3:41pm. A threebie, freebie. For those who prefer to see riders out on the road, after leaving the Ventura Fairgrounds at 12:10pm along Shoreline Drive, the women will (quickly) head into town via Figueroa Street, before making the steep climb up Palm Street and turning left on to Poli Street. From there, they’ll whisk along Cedar Street before intersecting Ventura Avenue and heading out of town. Both the men and the women will come back into town via Ventura Avenue, before swinging up on to Cedar Street, and then (further up) into Grant Park behind City Hall, before descending, via Hemlock Street and San Jon Road, for a final sprint along Harbor Boulevard to the Ventura Fairgrounds. Ventura earned the right to all this excitement, thanks to the town’s wholehearted embrace of the Amgen race and its riders; first with a stage ride through town in 2016, and then with a rousing men’s race start (at the Ventura Pier) last year.

“Amgen Tour of California took notice of our small beach town in 2016 and felt charmed by the way our community embraced the event in 2016 & 2018. This is a compliment we celebrate and uphold as a challenge to plan something even more special for 2019,” said VVCB President & CEO Marlyss Auster. “We look forward to once again bringing the community together to celebrate and showcase our wonderful Ventura in the International spotlight.”

World class sport and support. Yep.  Look forward to it. 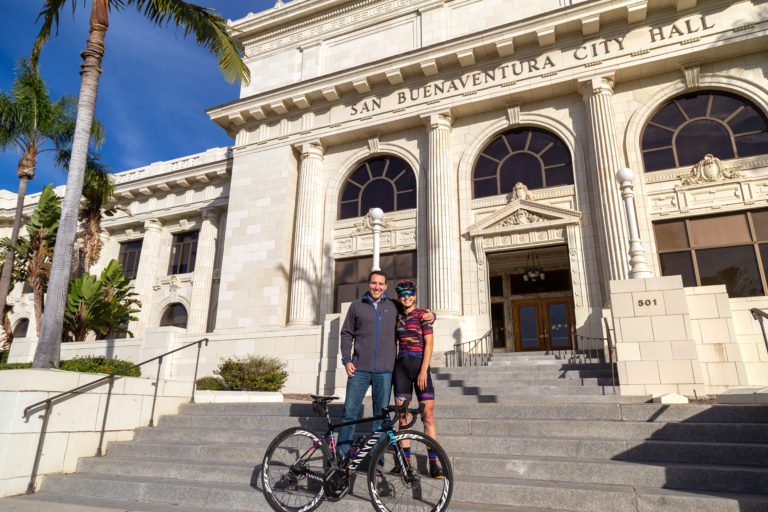