by Visit Ventura
Featured image by FC the Cat

The Amgen Tour of California flies into, and out of, Ventura on May 16th. The women’s race starts (12:10 pm) and finishes (roughly 2:50 pm) at the Ventura Fairgrounds. The men, racing down from Pismo, will sprint across the Fairgrounds finish line at roughly 3:40 pm.

Below, a smattering of knowledge, so that you can converse intelligently should you find yourself, say, sharing a curbside cheering spot with a Frenchman.

C’est vrai, it’s not the Tour de France. But the Amgen Tour of California is the biggest professional cycling race in America and the only U.S. men’s and women’s races on the UCI World Tour calendar. Before the Frenchman interjects, that would be the Union Cycliste Internationale.

The race will be aired in over 192 countries. Comb your hair.

This year’s race is the longest and most challenging course in the Tour’s 14-year history. The men’s race — seven stages covering some 750 miles — begins in Sacramento on May 12th and ends in Pasadena on May 18th. The women will compete in three stages, from May 16-18, covering upwards of 180 miles. The women’s race also finishes in Pasadena and starts right here in Ventura

This year’s race holds special significance as Olympic hopefuls gear up for Tokyo 2020.

The men’s stage from Pismo to Ventura covers 135 miles, with an elevation gain of 9,681 feet, including a short, but grueling (10% grade) climb up into Grant Park that will definitely shake things up. Maybe you should advise the Frenchman that the two of you stand there.
The women’s course (59 miles, elevation gain 4,885 feet) is a loop that starts at the Ventura Fairgrounds and heads up through the Ojai Valley and across to Carpinteria, before heading south again to finish at the Fairgrounds. The women also make the stirring Grant Park climb.
Both the men’s and women’s Ventura finish will likely end with a wild sprint along Harbor Boulevard, Figueroa Street and Shoreline Drive to the Fairgrounds finish. 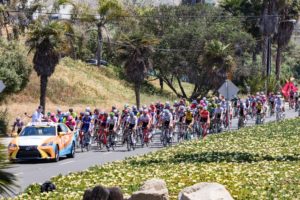 The prized yellow jersey is worn by the rider with the lowest cumulative time over the entire race.

What’s with the blue jersey?

That would be the “Most Courageous Rider” jersey, awarded daily to the man or woman cyclist who best displays the courage of those engaged in the fight against cancer/heart disease (the race helps raise money for these worthy causes).
Because, though we may come from different countries, we all understand that courage and determination extend beyond the race course.