What is the Amgen Tour of California?

The Amgen Tour of California is America’s largest road cycling race; many of the world’s top professional cycling teams compete along a demanding course that traverses the state. The course changes from year to year. It’s now in its 14th year. The race is part of the prestigious UCI WorldTour, a designation reserved for the world’s premier races like the Tour de France.

Will the race come to Ventura?

Yep, and in a VERY BIG WAY. The Amgen Tour of California flies into, and out of, Ventura on May 16th; one race start and two race finishes! The women’s race starts (12:10 pm) and finishes (roughly 2:50 pm) at the Ventura County Fairgrounds. The men, racing down from Pismo, will sprint across the Fairgrounds finish line at roughly 3:40 pm.

Can I volunteer here in Ventura?

You bet! Because there will be so much action here, we’ll need LOTS of volunteers to show how our city shines. 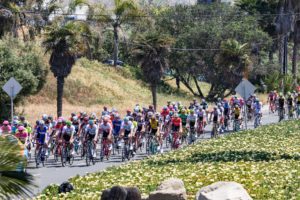 What is the UCI WorldTour?

UCI WorldTour events are top-level races for professional cyclists. They form a series, with riders competing for the overall UCI title as well as individual wins.

Why is it called Amgen Tour of California?

The race is named after its main sponsor, Amgen. Thank you for all your good works, Amgen. This year’s race will raise money to fight cancer and heart disease.

When did Amgen Tour of California first start?

The first Amgen Tour of California took place in 2006.

Who rides in the Amgen Tour of California?

What’s the route this year?

This year’s race is the longest and most challenging course in the Tour’s 14-year history. The men’s race — seven stages covering some 750 miles — begins in Sacramento on May 12th and ends in Pasadena on May 18th. The women will compete in three stages, from May 16-18, covering upwards of 180 miles. The women’s race also finishes in Pasadena, and starts right here in Ventura.

What defines a “Stage” in the Amgen Tour of California?

Stages represent one day of riding in the tour and occur on a route between two California host cities (or sometimes — think Ventura — the same city). Stages vary in length and can cover vastly different types of terrain. In the Amgen race, the men and women ride different routes on different days.

What are the specific stages for the women’s race? (ladies first)

What are the specific stages for the men’s race?

How can I find out how individual cyclists and teams are doing?

The Amgen Tour of California tracks daily race leaders and cyclists to watch. And their media resources tally the daily results and quotes for both men’s and women’s races at each stage. Please click here.

How will I be able to identify teams and individual cyclists while they’re racing?

Each cyclist will be identifiable by a large number on the back of their shirt. Teams can be identified by the color and pattern of their jerseys. A visual key to team jerseys can be found here for men, and here for women. Both men and women will be awarded daily with special jerseys for outstanding achievements. Keep an eye out for “Le maillot jaune” (the yellow jersey), worn by the overall race leader (the rider with the lowest cumulative time over the entire race up to that point). Watch for the blue jersey too. It’s the “Most Courageous Rider” jersey, awarded daily to the man or woman cyclist who best displays the courage of those engaged in the fight against cancer/heart disease.

What is the best way to follow the tour?

Nothing beats being there, but you can also watch online with the Microsoft Tour Tracker. Download it here.

How popular is the Amgen Tour of California?

It will be aired in over 192 countries.

Where are the best places to watch the race in person?

Start and finish cheer sections are electrifying, but out on the course is great too. Inside tip: places, where there are turns, are good because the cyclists have to slow and you’ll get a better look.

Where can I see the race live in Ventura?

Click here for the men’s Pismo to Ventura state and here for the women’s Ventura route. A lot more opportunity to see the women since they ride a looped race that starts and finishes at the Ventura County Fairgrounds. If you’re coming to the Fairgrounds, please think about biking in; parking will be very limited (there will be places to lock your bike). 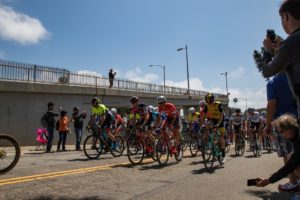 What are a few things I should know that will make me look like I know more than I do?

The men’s stage from Pismo to Ventura covers 135 miles, with an elevation gain of 9,681 feet. This includes a short but grueling (10% grade) climb up into Grant Park that will definitely shake things up. The women’s course (59 miles, elevation gain 4,885 feet) heads up through the Ojai Valley and across to Carpinteria, before heading south again to finish at the Fairgrounds. The women also make the stirring Grant Park climb.

What if that doesn’t impress the person I’m standing next to?

Tell them about the Ventura sisters. Kendall Ryan (2018 Amgen Stage 1 winner) and her sister Alexis Ryan will both be competing.

What should I wear?

Ha. Trick question to tempt you to channel your inner Super Fan. European races are famous for their wildly dressed spectators. Why should they have all the fun? Haul out that banana outfit, add your biggest smile and tag your shot(#VisitVentura)

Because you could win great prizes from Amgen and Visit Ventura!

Anything else I should know?

Adding just another notch of electricity, the 2019 Amgen Tour of California holds special significance as Olympic hopefuls gear up for Tokyo 2020. Take your heart medicine.

This resourceful map will tell you where to cheer, where to park, where the women’s & men’s starts are as well as the road closures marked as “A-B”

Get your dose of ghost hunting in April