Our trip to Ventura, California was a fun “Vegan Vacay” – we dined our way through some fabulous restaurants! (For our vegan eatery itinerary, check out Part 1 of this story!) And of course, there are plenty of sights to see and things to do in Ventura, as well. Here are some of our favorites!

San Buenaventura Mission and Church Museum: 211 E. Main Street. The Old Ventura Mission was the last of six missions personally founded by Franciscan Father Junipero Serra. This was actually the third church built on this site: the first was destroyed by fire; a second effort was abandoned when the door “gave way”. This third church was finally completed in 1809, 33 years and one day after Fr. Serra first celebrated Mass on this site. Mass is still regularly celebrated here.

Visitors can tour the beautiful Mission church and grounds, and stroll the Mission Museum and gift shop. 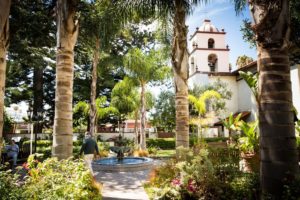 Albinger Archaeological Museum: 113 E. Main Street. Right next to the Mission, this fabulous free museum displays artifacts that have been found at excavations nearby. Items found from the Mission period include millstones, crucifixes, bottles, pottery, and buttons. Archaeologists also discovered Native American artifacts dating back 3,500 years, including bone whistles, arrowheads, and shell beads. An interpretive walk outside lets you see the actual site that was excavated, including an earth oven dating to 300 B.C. and a well serving the Mission occupants in 1844.

Valdez Alley/Eastwood Park: Look for the sign beside the Archaeological Museum to find this easy-to-miss stairway leading up the hillside to the remains of a historic “filtration building.” Constructed under the direction of one of the Franciscan Friars in 1792, this old brick structure helped bring clean water to the early residents of the Ventura Mission.

Ortega Adobe: The carefully preserved adobe of the Emigdio Ortega family can be found at 215 W. Main Street; there’s easy parking in the back. Son Emilio Ortega gained fame as the founder of the Ortega Chile Company, making chili sauce in his mother’s kitchen here in 1897. The Adobe itself is not open for visitors to walk inside, but you can stand in the (barred) doorways and peek inside. We especially admired the gardens around the outside, including trees that (we’re guessing) were popular in Ventura’s early days: olives, pistachios, and pomegranates (which had fruit on them when we arrived!)

Although we didn’t manage to visit, there’s also an Olivas Adobe to visit at 4200 Olivas Park Drive — the restored home of one of the early settlers, it dates to 1847. The grapes and fuchsias in its front yard are both said to be over a century old.

Courthouse & Father Serra Statue: 501 Poli St. Today used as Ventura’s City Hall, this iconic white stone building was originally built as Ventura Courthouse. The 1937 statue of Father Serra out front was initially sculpted in concrete during the WPA days. Weathering of the concrete artwork led to it being replaced with the current bronze replica in 1989. 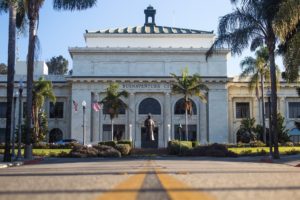 Grant Park – Take a drive up the hill above City Hall to find a scenic overlook, then all the way to the top of Grant Park for amazing views of the city and the historic Serra Cross. Father Serra himself is said to have erected a wooden cross here in 1782, and ships once used the prominent landmark for navigation. There are botanical gardens here as well. We found a “pop-up yoga” class getting started on the lawn when we arrived!

Two fabulous used-book bookstores: Bibliophiles are in for a treat at Bank of Books used bookstore at 748 E. Main. Check out their offering of fabulous vintage magazines, too. And I could disappear for years in the Calico Cat bookshop at 495 E. Main; definitely one of my favorite stops of the trip!

Stroll downtown Ventura’s Main Street for some fun and eclectic shops, and don’t forget to look up to check out the interesting architecture here, as well. You’ll find great old brickwork and ironwork adorning the fronts of the old downtown shops.

If you love old buildings, there’s also a fabulous Historic Walking Tour that will take you to 36 of Ventura’s historic sites and buildings. (Pick up a brochure with a map at the Visitor Center, 101 S. California St.)

Secret Gardens Florist at 677 E. Main is more than just a florist; their downtown coffee shop is a great place for a pick-me-up cuppa joe. (And as the name implies, you can buy flowers, here, too.)

The Ventura Pier is historic in itself. Today it’s 1,700 feet long, with food and other concessions. Find a convenient parking garage at the end of California Street (at Harbor Boulevard); just $2 bucks to park for an hour. Fish, picnic, or just stroll out and watch the surfers lining up to catch the waves — Ventura boasts some of the best surfing anywhere! 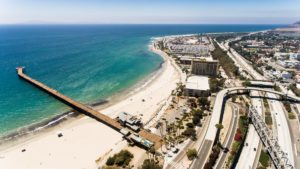 Post Office Murals by Gordon Kenneth Grant: 675 W.Santa Clara. Stop in to see the famous WPA-era murals painted by artist Gordon K. Grant in 1936-37 at the downtown Ventura Post Office. These folk-style paintings showcase the “industries and agriculture” of Ventura in a beautifully stylized way. Other murals by this talented artist have since been painted over, but Ventura’s have been preserved and remain open for the public to enjoy — for free.

Channel Islands National Park & National Marine Sanctuary: This free visitor center includes informative displays about the Channel Islands flora and fauna, plus a gift shop. Find information here about whale-watching and wildlife cruises as well as full- or half-day trips to the Channel Islands. Find the Park at the very end of Spinnaker Dr., past Ventura Harbor Village (a classic tourist venue with lots of shops, dining, and activities).

Check out their page to read more.