San Buenaventura’s historic City Hall was built from 1912 to 1913, originally to house the Ventura County Courthouse. By that time, the area over which it presided had been a center of civilization for centuries. First, as a locus for the indigenous Chumash culture; and, later, in 1782, as the site of the ninth jewel in the crown of Junipero Serra’s unique California mission system. By the time of the building’s dedication on July 4, 1913, the city of ‘Good Fortune’ had already seen forty seven years as an incorporated city and forty as the center of the county that bears its name. In that time, it had gone from a relatively small, geographically restricted town to a rapidly growing city with pier and railroad helping to encourage the flow of people and commerce through the area. A glance at the historical record might lead one to speculate that as the Ventura’s civic significance developed, so too did its architectural self regard. The first county offices operated out of a saloon on Main Street, an origin story that only serves to make the inspiring style of the luminous building at California and Poli Streets all the more striking. 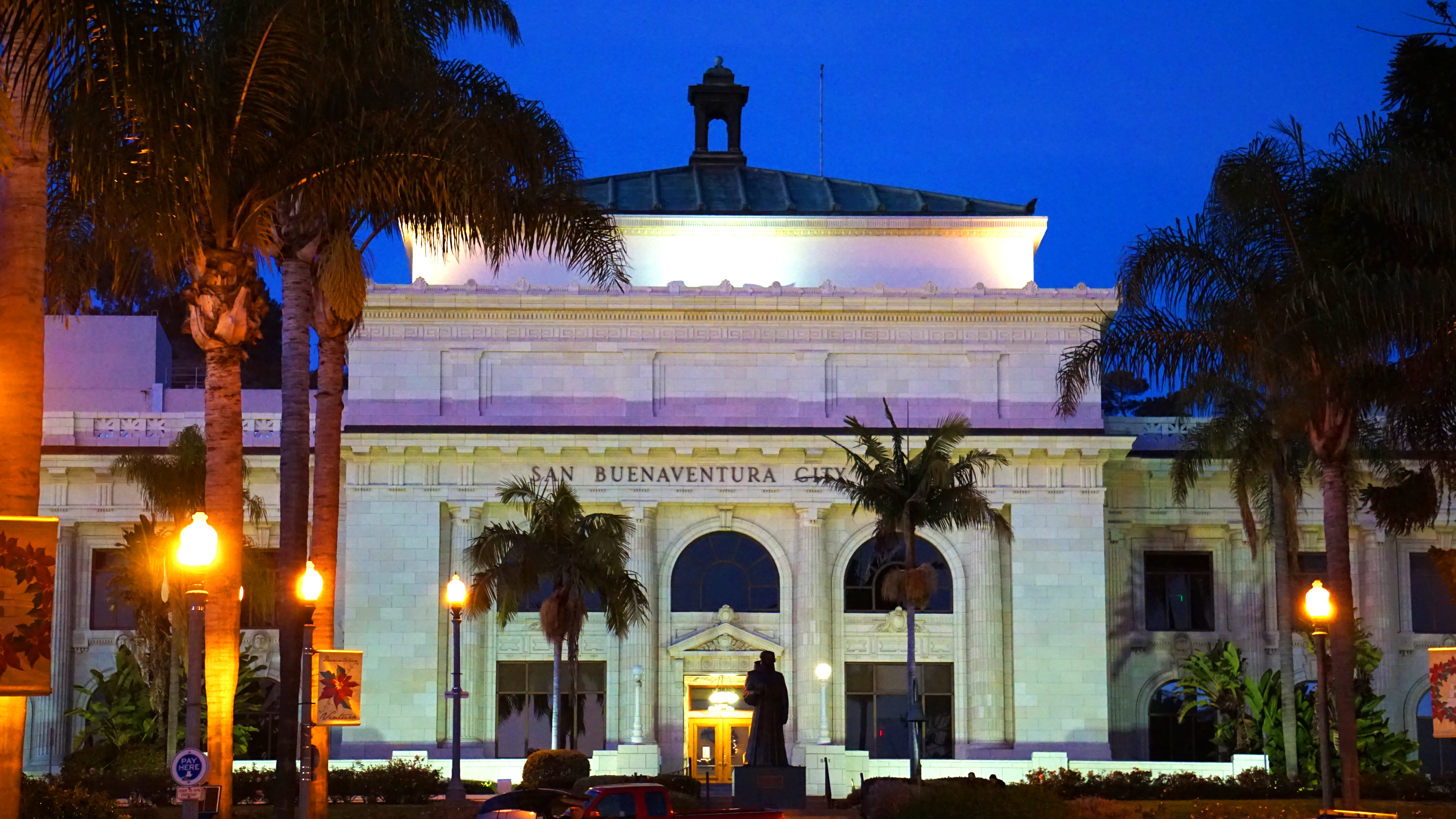 A prime example of the neo-classical or Beaux Arts style that dominated U.S. public buildings during the early 20th Century, our City Hall is as much an embodiment of aesthetic ideals as it is a functional building. Designed by Albert C. Martin, also noted as creator of the façade of the Bella Maggiore on California and the Chinese Theatre in Hollywood, the stylistics of the then County Courthouse harken back to the grandeur of the ancients to establish its bona fides. The Beaux Arts style, after the French school of the same name, promoted design in the manner of Roman imperial classicism, which it viewed as one of the eternal truths of architecture. Enthusiastically imported to the United States, this introduced a sort of renaissance in civic design. American architects, doubly seduced by the authority of ancient Rome and contemporary Europe, “began to put up little Romes everywhere”, as one critic wryly remarked. In essence, copying became the creative act of the day. The result was a rash of civic buildings that express, through citation of antiquity, the authority and eternal truth of our institutions. And so, our beautiful City Hall, with its elements of classicism – its Doric columns, pedimented entryway and roman arched windows; its interior Carrera marbles (cut from the same quarry as Michelangelo’s masterworks) – was envisioned not just as an authoritative public building, but as an expression of truth and order in a region with an emerging sense of its own identity. 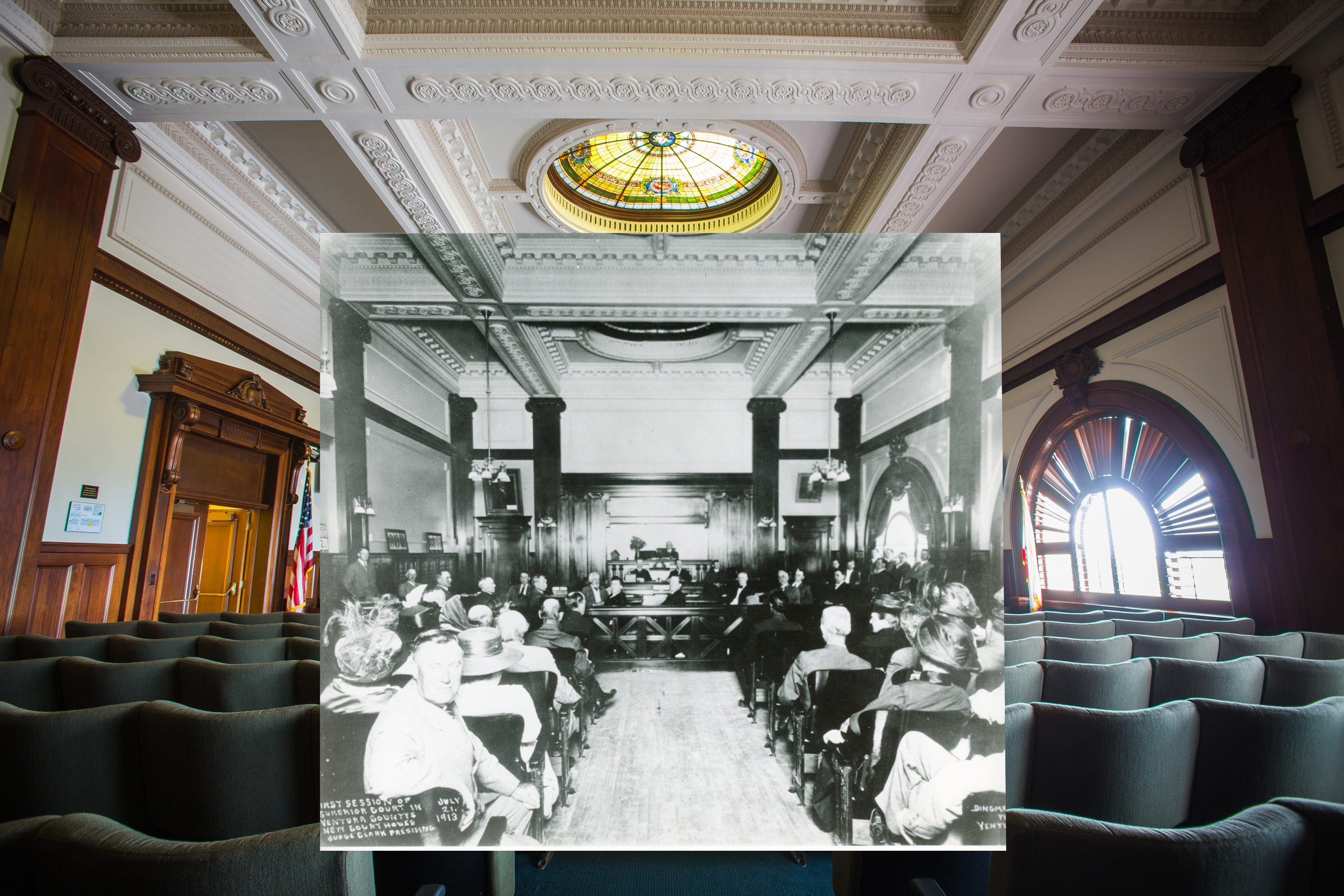 Of course, not all is lofty classical reference. Our building charms with localized elements as well. The exterior terra cotta tiles and embellishments are crafted of clay “of excellent quality and abundant supply” from reserves in Lincoln, California, (by Gladding McBean a Company still in operation). The bronzed entry gates, only partially visible, are decorated, according to Glenda J. Jackson, with “bouquets of lima beans. Ventura County’s cash crop which, in essence, paid for the glorious building.” That would amount to about $225,000 worth of lima beans, the cost of the construction at that time. And then there are those distinctive friars busts that adorn the façade of the building, giving a playful nod to Ventura’s early days as a mission settlement and a unique touch of levity to the neo-classical pomp. 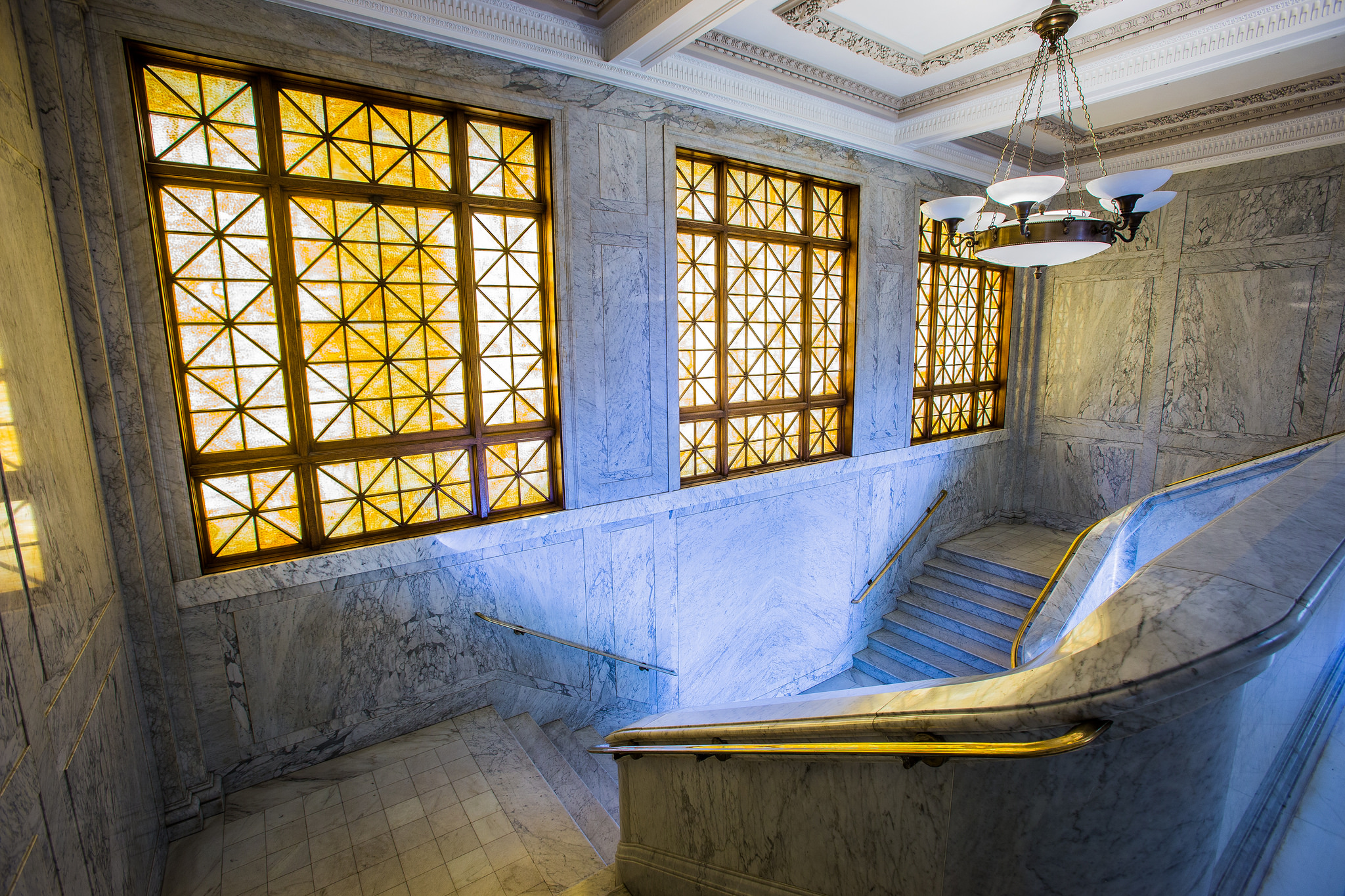 The building has also, in more recent years, come to host significant local art projects, including the forceful statue of Junipero Serra by Ojai artist John Palo-Kangas which stands sentinel in front of the building. Inside the atrium, can be found a wooden replica of same by Channel Island Carvers, as well as a remarkable Chumash petroglyph mural which effectively serves to balance the narrative of our missionary past with the cultural expression of the area’s first peoples. In May of 1999, establishment of the Municipal Art Acquisition Program introduced to the landmark building an ongoing exhibition of works by contemporary local area artists. 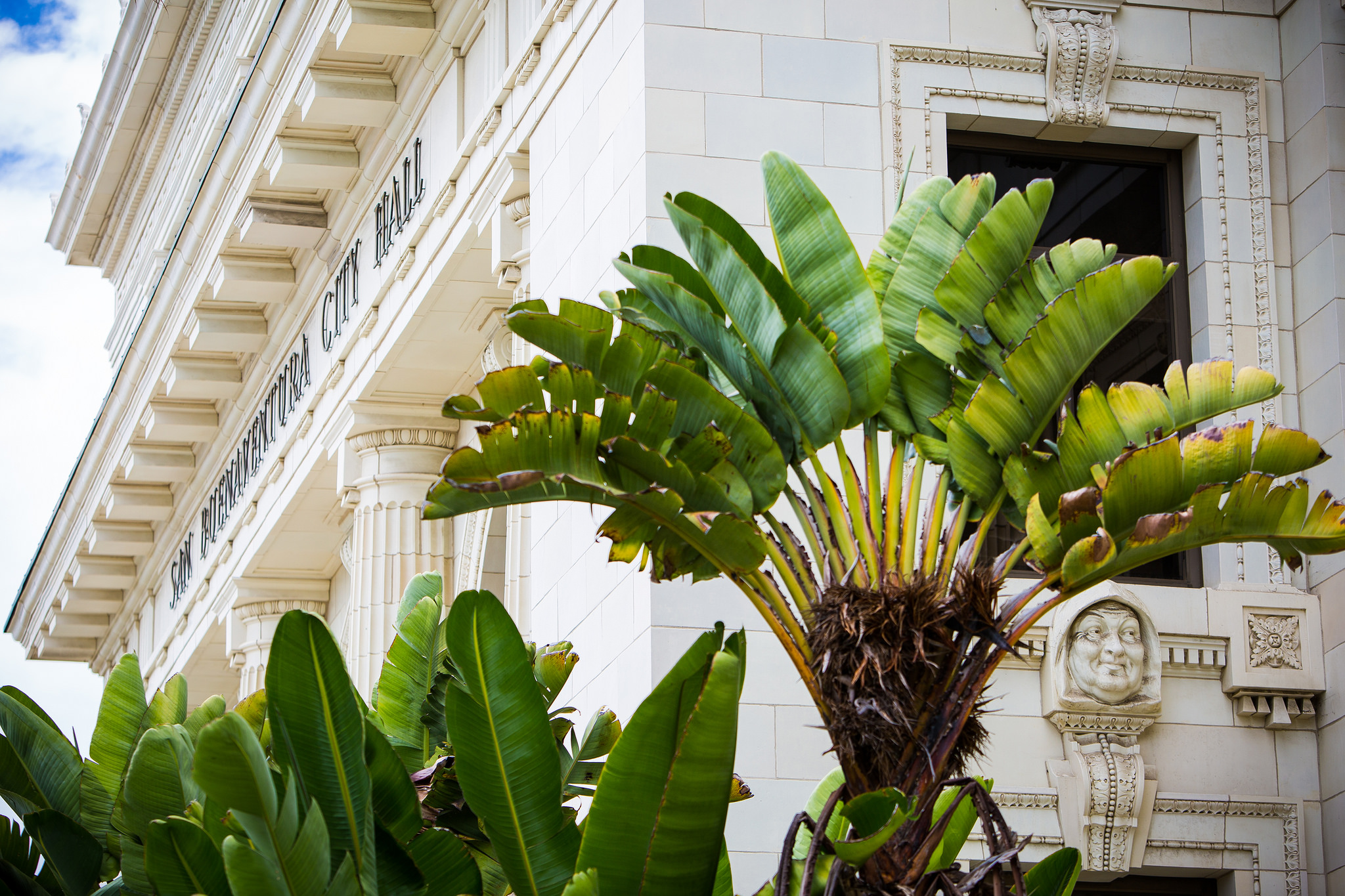 Yet, as our City Hall isn’t simply a copy of Rome, nor is it just a repository of art and artistry. Our neo-classical beauty has also accommodated the ordinary functioning of business and suffered the inevitable passage of time. The original County Courthouse structure was expanded in 1932 to include the sheriff’s offices and a local jail. Of the countless trials and issues of official business that the building has seen over the years, none stand out quite so spectacularly as the 1959 trial of Elizabeth “Ma” Duncan, a trial notable not only for the gruesome nature of the crime, but also as the occasion of the last woman executed in the state of California. Among the infamous guests in its jail can be counted Charles Manson, who passed through on minor charges in the late 1960’s. It was around that time that the old Courthouse itself proved to be less than eternal, being condemned by the county as seismically unsound in 1968. Scheduled for demolition, the city, deftly identifying a winning possibility, stepped in to renovate the building, at once preserving a precious landmark and ensuring Ventura a truly distinctive City Hall.

City Hall reigns as a symbol of our enduring civic pride, as well as the architectural expression of our dreams. Not only those of our future, but also those of our past; from the rich culture of the Chumash and the transformative mission of Junipero Serra, to the desires of early settlers and citizens whose hard work and sustained vision helped to make Ventura a city, as well as a regional treasure. One day when you are downtown, take the time to pay your respects. Consider the particular beauty of the building. Enjoy its art. Walk up the grand staircase to our handsome City Council Chambers (formerly the courtroom), imagining the stories that they might tell. From the window, take time to appreciate a perfectly framed picture of our historic downtown from the heart of its most remarkable building. Is Ventura’s City Hall a statement of an eternal truth? Perhaps not, but as embodiment of our history it probably comes as close as anyone could hope. 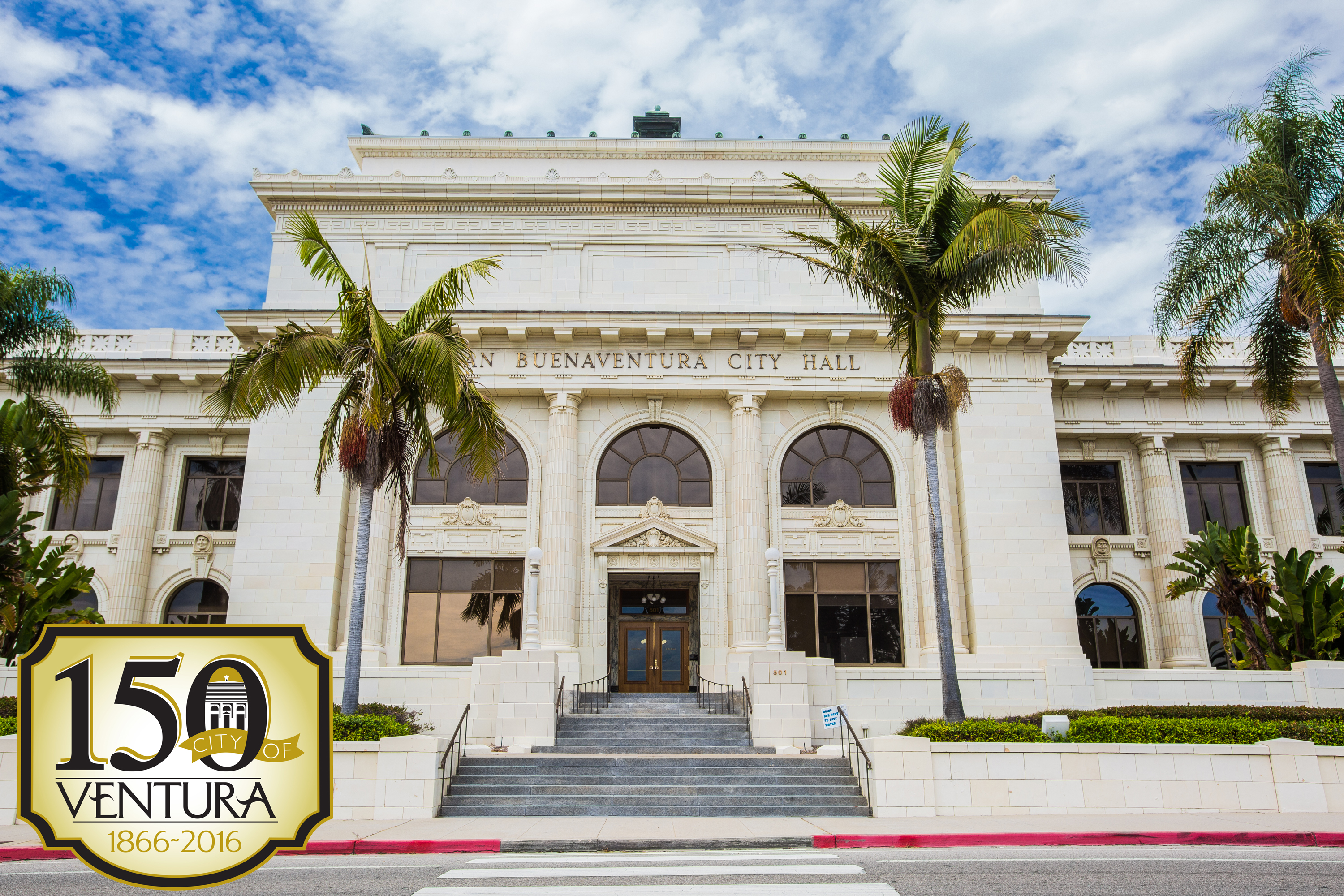