Eucalyptus trees are now ubiquitous in California and it is commonly known that they were introduced during the Gold Rush era in hopes of providing fast growing timber for railroad ties.  While they didn’t quite work out for that purpose, they remain and have become a elemental part our southern California landscape.  More rare, grand and remarkable in many ways is another Australian native introduced around the same time:  the Moreton Bay Fig Tree.  Ventura has the good fortune to have one of these remarkable trees prospering in Plaza Park, at the corner of Chestnut and Santa Clara Streets.
In botanical terms, our majestic Fig is known as Ficus macrophylla and is a member of a family of trees that includes the common fig, the Indian banyan and the Indian rubber tree. It is a native of the subtropical rainforests of Australia’s eastern coast, where its fruit provides an important source of food for area fauna. Our tree stands 73.5 feet high, its branches spread over 139 feet and its massive trunk is 8 feet 8 inches wide.  This beauty is monumental in every sense of the word.
Historically, our tree began its life in 1874:  planted in Plaza Park by an unknown horticulturist well ahead of the planting of F. macrophylla in other areas of southern California, including four that shade an area of El Pueblo de Los Angeles Historical Monument (1875), and two other central coast trees, one in Santa Barbara (1876) and another in Santa Paula. (1879). These great historic trees made their way across the Pacific as either seed or sapling and, as one historian of Los Angeles’ “majestic mammoths” has suggested, were originally prized for their promise of fast growth and dense leafy canopies without idea of just how mammoth they might become in southern California’s more arid climate.

Theodore Roosevelt stopped by in 1903, to extol the “wonderful beauty of [the area’s] semi-tropical climate and soil”, and proclaim Ventura “an earthly paradise”

From its place in Plaza Park, our tree has witnessed its share of vintage Americana moments.  In 1892, veterans of the Grand Army of the Republic gathered nearby to commemorate the 27th Anniversary of the Civil War, then a still fresh memory of unimaginable national turmoil.  A campaigning Theodore Roosevelt stopped by in 1903, to extol the “wonderful beauty of [the area’s] semi-tropical climate and soil”, and proclaim Ventura “an earthly paradise”, stating frankly to his public: “I do not wonder that you look happy. I should be ashamed of you if you did not.”  John Phillip Sousa, that great musical mainstay of 4th of July fireworks displays, conducted a musical concert nearby; likely, a concert featuring The Diplomat March, which he penned in ‘San Buena Ventura’ in 1904.  And who knows what countless private moments in the life of Ventura’s citizens the tree has witnessed over the years: what games have been played, lunches savored, naps taken, arguments resolved (or not?), hands held, kisses stolen, futures imagined, decisions made, and promises proclaimed under its massive canopy.
In a 2007 LA Times article, journalist Catherine Saillant explored the challenges facing a tree of such great age and civic popularity.  Apparently, the tree’s luxuriant canopy was showing signs of stress. Experts were consulted; samples analyzed. It was concluded as simply possible that too many souls had walked over its roots and basked in its presence over the years, compacting soil and making it hard for the tree to draw up the resources that it required to flourish.  Measures have been taken to treat the ailing monument.
Our tree has seen 142 of those years. It is a significant part of our history, to be witnessed and enjoyed as a part of our community, as part of the beauty that draws tourists to our town.  At the end of the LA Times article, Saillant talks to a family of visitors marveling at our monumental tree with its soaring branches and jurassic roots.   Amazed, one little girl exclaims, “It is old and beautiful.  I hope that nothing happens to it.” In southern California where drought threatens, where history is forgotten and the old disappears so easily in favor of the new, we can only say, “Absolutely, we couldn’t agree more.” 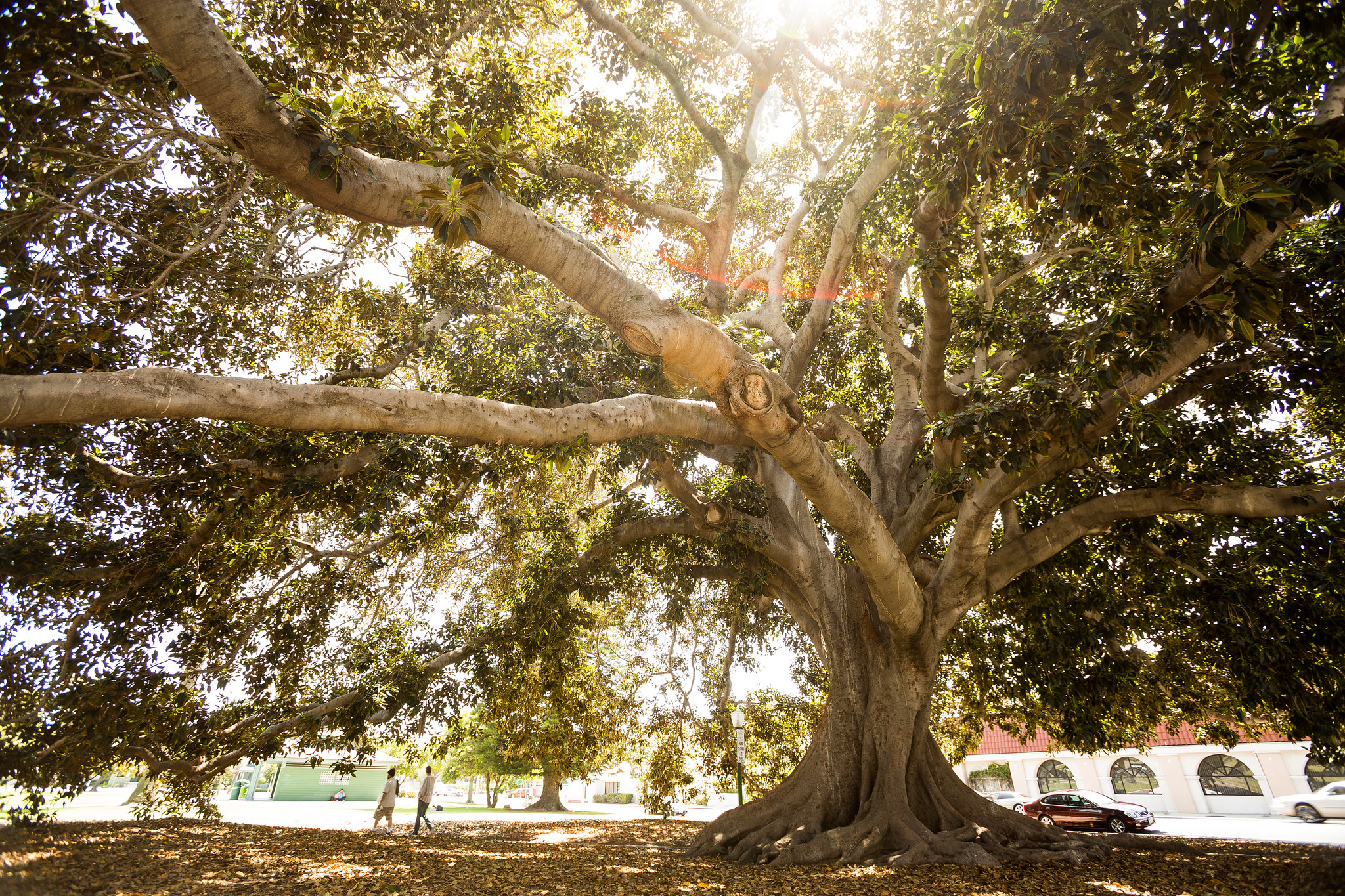