Read More
Mission San Buenaventura will present a special art exhibit from August 6 through November 5, 2016: a trilogy titled “El Camino Real” by late artist and architect Aurelio G. D. Mendoza. Three large mural-like oil paintings depict the conversion of the indigenous people in Mexico; another depicting Fray Junipero Serra directing his companions forward on their travels; and the third painting depicting the construction of the first mission in Alta California, Misión San Diego de Alcala. Fray Junipero Serra founded the first nine of the famed 21 California missions. Mendoza was a noted artist and architect in his day. His lasting legacy is “La Ofrenda,” the construction of which began when Mendoza was 80 years old. Erected on the grounds of the Basilica de Nuestra Senora de Guadalupe in Mexico City, the monument adorns the Tepeyac gardens and includes 17 larger than life-sized statues depicting Mexican natives offering gifts of food and game to the Virgin of Guadalupe, who stands with open arms to the people of Mexico. Millions visit the site annually. Mendoza never had his “El Camino Real” trilogy exhibited during his lifetime. It is thanks to the love and generosity of his daughter-in-law, Emma Mendoza, that the exhibit is made possible. In honor of St. Junipero Serra, the first Hispanic saint to be canonized (September 23, 2015) on American soil, the exhibit will be on display to the public in the Mission San Buenaventura Gift Shop, 225 E. Main Street, Ventura. The Gift Shop is open daily from 10 a.m. to 5 p.m. There is a nominal fee to tour the Mission Museum, Gardens and Church. The El Camino Real originated in Loreto, Baja California Sur and stretches from Baja in Mexico to San Rafael in Alta California in the United States of America. For more information, visit the Mission’s website. 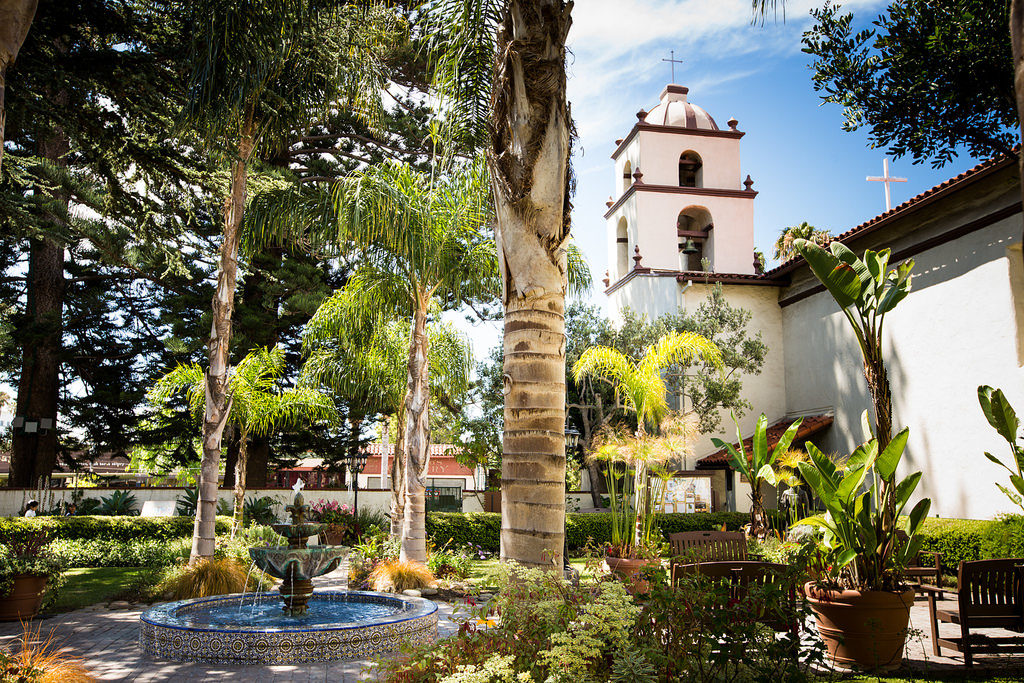 ABOUT THE ARTIST: Aurelio G.D. Mendoza was born October 1, 1901, in Guadalajara, Mexico. At the age of 17, the young man learned to paint theater backdrop scenery under the direction of the Tarazona brothers, master painters from Valencia, Spain. Later, in Mexico City, he painted scenic backgrounds for several theaters, including the Palacio de Bellas Artes (Palace of Fine Arts). He was named “El Mago de la Escenografia.” When Mendoza realized his talent for executing architectural projects, he entered the Academia de San Carlos in Mexico City, learning from Lino Picaseño y Cuevas. He soon became a draftsman, collaborating with architects and building engineers, eventually working on Mexico City’s multimillion-dollar Teatro Metropólitan, where he also served as the General Director and Artistic Designer. Select outstanding works from this project are the oil paintings that adorn the theater, each of which measures 8 by 12 feet. Likewise, Mendoza contributed the asbestos tapestry in the Teatro Alameda, two 10 by 30 foot paintings in the Cine Bucareli, and one in the Jai Alai building. In the cities of Chihuahua, Cuauhtemoc, and Juarez, he contributed to the design and the interior backdrops, statues, and paintings in the historical and cinematic treasures Cine Plaza theaters. Private commissions included buildings and private residences for a former president of the Mexican Republic, and the Kessel mansion in Polanco, Mexico, which is an excellent example of Mendoza’s vision and willingness to experiment. Mendoza’s skills extended beyond architecture, design, and art. His work lives on in an opera titled “Yayax-Can,” which centers on Mayan mythology. His final and most renowned project, “La Ofrenda,” is located in the Jardin del Tepeyac of the Basilica de Nuestra Senora de Guadalupe in Mexico City. He was commissioned, at the age of 80, as the architect of a monument to La Virgen de Guadalupe. The project includes 17 larger than life-sized bronze statues celebrating the indigenous people’s adoration of La Virgen de Guadalupe. The monument took four years to construct with Mendoza presiding over all aspects—design, engineering, masonry, landscape, waterfall design. He also modeled for statues he designed so they could be molded to his artistic vision. “La Ofrenda” (The Offering) was opened to the public in September 1986 and has been admired by millions. Two of the statues designed by Mendoza were reproduced and are on display at the Church of Maryville in Des Plaines, Illinois, which the Cardinal of Mexico proclaimed the “Second Tepeyac of North America.” Mendoza passed away in Los Angeles in 1996.