Big-time Cornhole Comes to Ventura (everything you should know)

Here in Ventura, The Biggest Cornhole Tournament In The World looms just around the bend: The (aptly named) Throw Down, Friday, August 23rd through Sunday, August 25th, hosted by Spencer Makenzie’s Fish Company. Two hundred and twenty-five teams. Thousands in prize money. Bands and a block party. When it comes to cornhole (or pretty much any party), it gets no better. More on The Throw Down (and the Ventura cornhole scene) in a moment, but let’s start with a little cornhole education. Because in the ensuing days the topic of cornhole will be on many tongues, and who doesn’t want their tongue to be the glibbest? Regarding the sport of cornhole and the facts, there’s substantial gray, but whoever let facts get in the way of fun isn’t writing this blog.

A few things you should know (or wish you didn’t).

It’s a little like horseshoes, but instead of heavy metal horseshoes you have to duck, players toss bags full of corn kernels (hopefully) into a hole on an angled board. If the bag goes through the hole, it’s three points. If the bag lands on the platform, one point. Generally, there are two teams with two people on each team, and the first team to hit twenty-one points wins. But beer is sometimes involved; thus backyard games can get very creative.

Yes, there is one. The American Cornhole Association.

There is much debate regarding cornhole’s origins. No, really. Many believe the actual place where cornhole began is unknown. Many also believe the game was invented almost 600 years ago in Germany. Many don’t believe this either. Maybe it was invented by the Blackhawk tribe, who used pig bladders filled with beans. Someone knows, but they’re long gone. Maybe you can make up your own very interesting beginning.

There is a cornhole capital of the world…

and it is Cincinnati, Ohio. Cincinnati is where the American Cornhole Association was founded. “Cornhole the Movie” was also filmed here. Yes, there is a movie. Yes, there’s probably a good reason you’ve never heard of it. 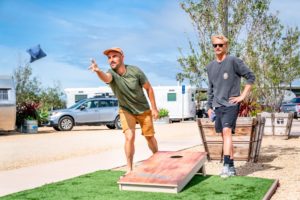 Many terms accompany the game of cornhole. Like the niche verbiage in other sports, most cornhole terms have no meaning outside the sport, and sometimes only the most tenuous connection to the English language. ‘Nothin’ But Corn.’ The bag goes right through the board hole without touching any part of the board. Basketball players, this one makes sense. A “woody” or “boarder” is a bag that hits the board and stays there. Makes some sense too. “Get that corn out of my face!” This is purportedly said when one player stymies an opponent’s attempt to score. Not to be confused with the phrase used by at-their-wit’s-end mothers.

You shouldn’t be intimidated by cornhole…

Someone actually wrote this. Someone who possibly fears other things, like Mr. Rogers and Winnie the Pooh. In its most rudimentary form (how most of us play it), cornhole is just a great excuse for some amiable competition and some really bad aiming.

which is exactly why you should come on down to Spencer Makenzie’s on the corner of Ash and Thompson, and have a look at the world’s best, vying for over $62,000 in prize money. And also put the annual Surf Rodeo cornhole contest (every summer on the beach) on your radar. And keep your eyes open for other Ventura cornhole tournaments that pop up now and then (Bombay Bar & Grill has hosted tournaments). And maybe combine your leisure activities with a chance to hone your game (Rincon Brewery has cornhole on their patio). Or just buy your own cornhole set and head to the beach to practice.

A Beginner’s Guide to Surfing in Ventura

Good Things are Happening in Ventura (Part 3 of Many)

Top 10 Foods to Look for at the Ventura County Fair!

Thank you, Haole. The True Meaning of Legend.