What is Ventura’s Chinese Fire Company?

(and thank you, all first responders)

Ventura takes pride in its diversity. Our residents represent myriad cultures, and they’re deeply proud of their heritage. Many have been here for generations, building our town into the rich kaleidoscope we know and love. Now and again we’ll highlight a piece of Ventura’s multicultural story. See it as one square in a unified, patchwork blanket. April 14th was national fire service day. In honor of the debt we owe all firefighters and first responders, here’s a brief look at Ventura’s storied and brave Chinese Fire Company.

Heroism, it seems, spans the ages in Ventura.

Though records are understandably spotty, it’s believed that Chinese immigrants first began arriving in Ventura in the mid-1860s. Their community grew quickly, a hard-working enclave of laborers, farmers, cooks, laundrymen, gardeners, servants, and fishermen passing life as we all do; conducting business, raising families, and enjoying rare leisure time with perhaps a little gambling. Soon enough Ventura’s China Alley grew into a bustling, and tightly spaced, cluster of wooden shanty buildings lining Figueroa Street below the mission. Note the words “tightly spaced” and “wooden.” And so the Chinese Fire Company was established in the 1870s, and they provided help not just to the Chinese community, but to the rest of the equally flammable wooden-structured town. A small accident (a toppled lantern) could turn quickly to disaster. In December 1890 a fire nearly burned all of China Alley to the ground. 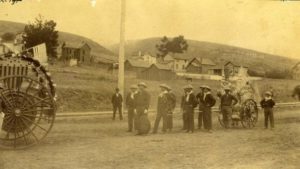 Photo was taken in the late 1800s by John Calvin Brewster

Understandably, response time was essential. Couched in the framework of the time, the Chinese Fire Company were indeed rapid responders. When a fire was discovered, a gong was sounded and the firemen leaped into action, pulling a fire hose cart to wherever it was needed. These were real people, men like Soo Hoo How, one of the early Chinese Fire Company chiefs, who ran a hand laundry on Main Street (that business continued on until 1938 in the hands of his son). And “Charley” Hay Yee, who lived near the shed that housed the fire hose cart at the east end of China Alley. Designated keeper of the key, Mr. Yee opened the shed when the gong sounded. Apparently he, and the rest of his fellow fighters (somewhere around a dozen) were fast to their feet. In a March 1903 article, the Ventura Free Press acknowledged their quickness (and their need for new equipment)…

“The Chinese Fire Company is peculiar to Ventura and a valuable adjunct. By its promptness always, it has saved 1000’s of dollars worth of property and it would not be a bad idea to give it a benefit so it could have a new complete outfit. Its maintenance has never cost the town a cent.”

Another article in the same issue reported that the Chinese Fire Company had arrived ahead of city firefighters, perhaps helping save the Ayers Hotel.

So take a moment to find your way to the China Alley Memorial Mural. Enjoy the beautiful scene created by artists (and husband and wife ) Qi Pang and Guo Song Yun. In the sunny quiet, close your eyes and listen to the past breathe. But life isn’t always sunny and quiet. So, in all times, thank you firefighters and first responders.

What Does Visit Ventura Do?

Highway One is open! Here are your can’t miss stops for the ultimate road trip.