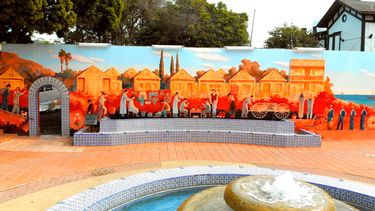 In the early 1880’s, a flourishing Chinese settlement made up of merchants, laborers, and families settled in an area along Figueroa Street between Main and Santa Clara Streets. The largest concentration of activity was in an area known as China Alley, which ran perpendicular to Figueroa Street. The Chinese immigrants built housing, grew and sold food, and provided a place of worship for the immigrants. Artisans, vegetable gardeners and fishermen plied their trade. Merchants exported marine products and imported Chinese goods. Other contributions of the Chinese immigrants to the community included a water flume above the San Buenaventura Aqueduct along Ventura Avenue and the Chinese Fire Brigade that served China Alley and the surrounding neighborhood. The Chinese Brigade was often the first fire company at the site of a fire and was instrumental in saving many structures in the downtown area. During the early days of immigration, the people of San Buenaventura welcomed their new Chinese neighbors as an inexpensive source of labor. However, with the incorporation of strict national immigration laws in the early 20th century, a hostile environment forced the residents of China Alley to relocate to other areas.