Ventura: A Fun Glimpse of the Not-Entirely Distant Past — the Ventura Pier

All photos courtesy of the Museum of Ventura County

History is right beneath our feet, men and women who lived their lives in their own time and place — sometimes a place vastly different from what we know; sometimes spot on the same. They too loved and lived, worked and warred, laughed and cried. In their honor — and honoring our humanity kinship — Visit Ventura has been looking back, now and again, at Ventura’s past …
Sometimes it’s easy to breathe in the past. 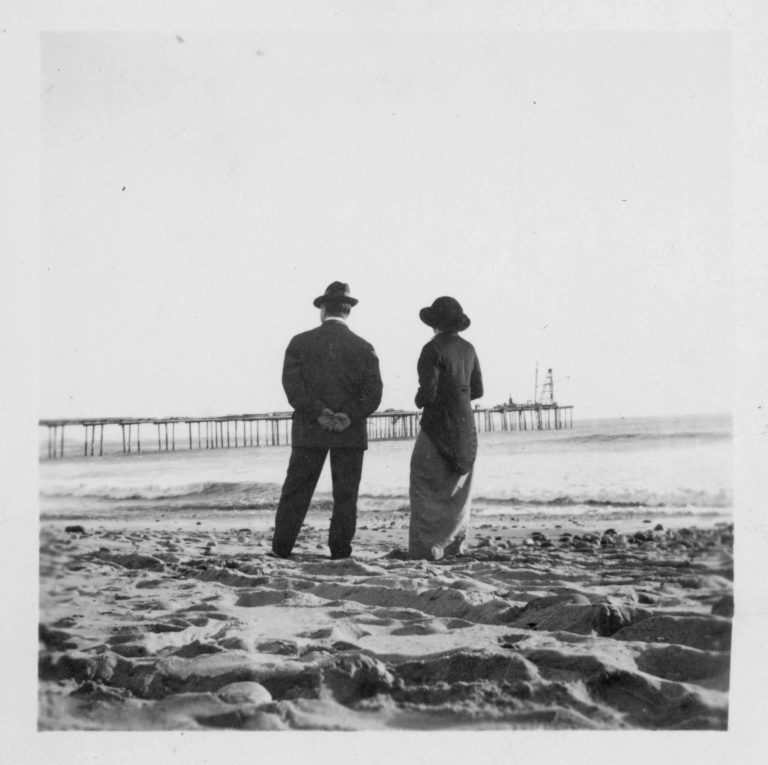 An unidentified man and woman on Ventura beach looking at the Ventura wharf, later Ventura Pier. Woman is in a long dress and hat, while man is wearing a suit and hat.

Yes, when it comes to the Ventura Pier, there may be no better place to inhale sky and sea. If it’s the end of the day, you can watch the sun slip behind hummocked Santa Cruz Island. If it’s the day’s beginning, make a slight turn and watch the sun pull free from the Santa Monica Mountains. If you choose to watch a sunset, stay and watch night come, the lights of the pier throwing fingers across the water, the stars winking as if in on a secret.
But there was a time when the Ventura Pier served a more important function than fishing, ambling, or daydreaming (not that these aren’t critical functions). Imagine, for a moment, a far different world. Tucked between two bridgeless rivers, before a railway was built in 1887, in the wet months the only way to reach Ventura was by sea. Before the Ventura Pier was built in 1872, goods and people reached town via coastal steamer, hopping aboard smaller boats that navigated the surf to offload on the beach. Lumber from the Northwest and Northern California that would frame the Victorian homes in Ventura’s hills was simply floated in with the waves. Anyone who has seen the surf here realizes this method of offloading and onloading could be enervating. 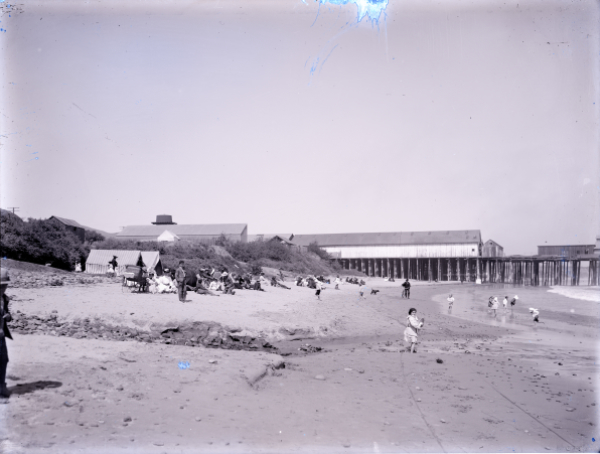 Ventura Wharf and beach with people relaxing at the shore. Early 1900’s

No small surprise, farmers, ranchers, and a nascent petroleum industry wanted a duller, more certain means of import and export. Construction of the Ventura Pier began in 1871 and, after much pile driving, hammering, and sawdust clouds in the air, the Pier was completed.
Not that the early days of the Pier were all about commercial enterprise. Soon after the 1872 opening, a member of the Ventura press noted that the Ventura Pier was “growing in popularity” on balmy evenings as “our fair and brave seek the cool zephyrs that waft in from the ocean” as they undertook an “invigorating walk or a dulcet tête-à-tête high above the murmuring of the driving breakers.” Likely the editor was off that day. 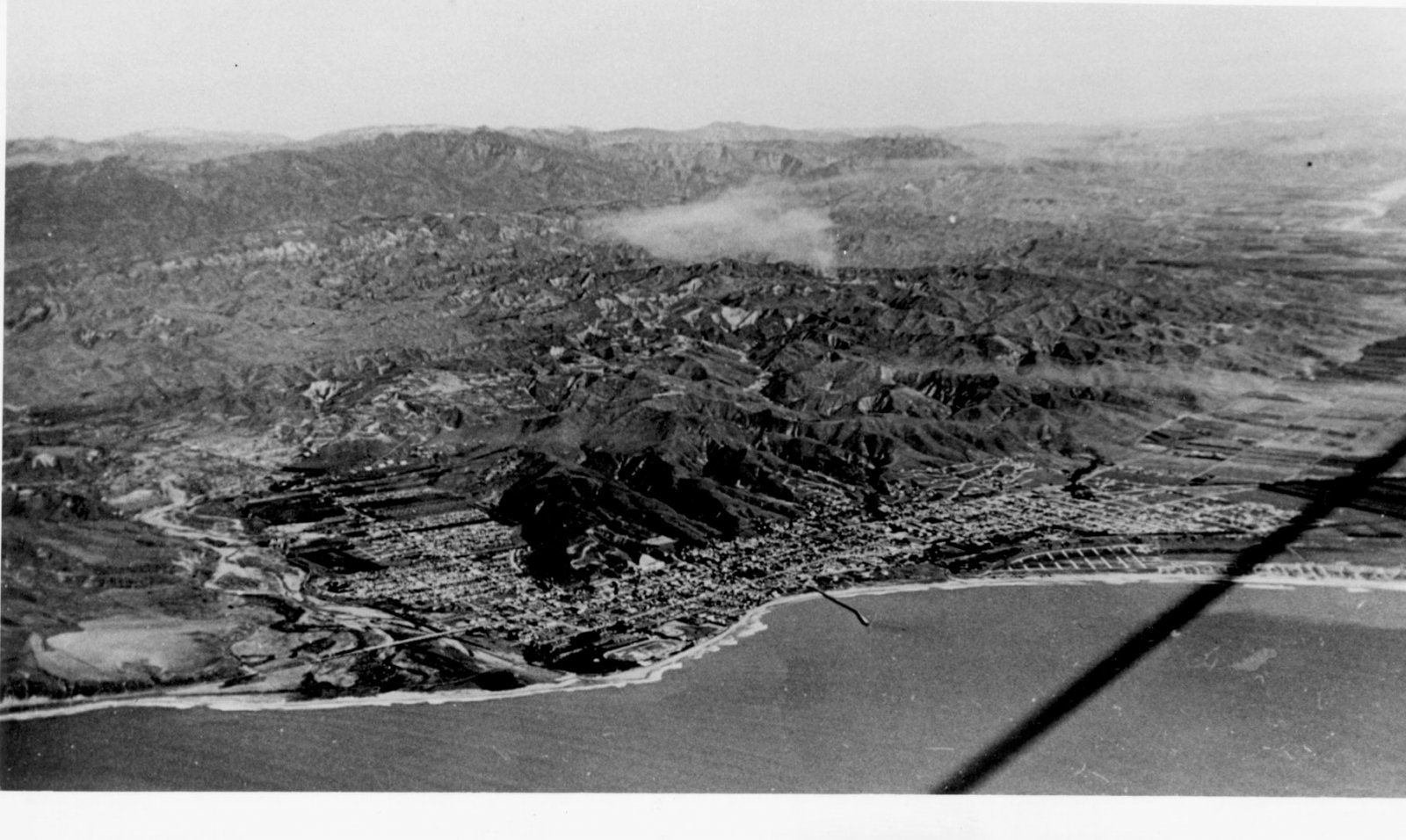 The driving breakers have not always merely murmured. Since its inception, the Ventura Pier has sustained various amounts of storm-related damage in, deep breath, 1877, 1926,1937, 1949, 1969, 1977, 1988, 1993, 1995, and 2015. And there may be a few years missing in there.
The ongoing damage — and astronomical expense of repairs (and upkeep — for the sea is an unforgiving neighbor) — saw the establishment of Pier Into the Future, an organization which continues to kindly and tirelessly fundraise to keep the Pier, simply put, standing (for more information on the passion behind the Ventura Pier — and how you can join in that passion — please click here.  And if you’d like to, quite literally, become a part of the Pier, a donation will see your name etched on the granite placards at the foot of the Pier. And the price is discounted through the end of December 2020.)
The Ventura Pier is sometimes described as iconic and it is.
But it’s more than that.
Stop again, and think.
Not every town’s citizens and visitors are fortunate to be able to draw a direct line from past to present.
Or, quite literally, feel history beneath their feet. 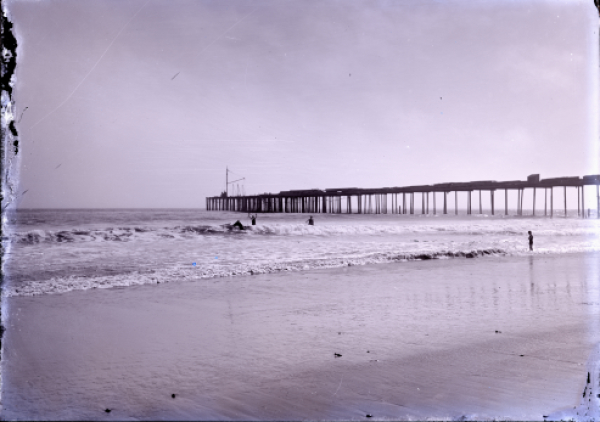 Ventura Wharf from the beach with people playing in the surf.

Shopping, dining, hiking, beach-going, beer-quaffing, wine-tasting, and all manner of fun in the sun (because that’s what Ventura does best). Want to know (almost) everything about Ventura? Please order our FREE Ventura Inspiration Guide.

What Can I Do in Ventura, California?