Not so long ago, bald eagles were in dire straits. In 1978 their numbers dropped so low, our national bird was listed for protection under the Endangered Species Act. Things were not good on the Channel Islands either. In the early 20th century bald eagles bred on all five islands that comprise Channel Islands National Park. But over the years, for a variety of reasons, almost all of them due to man, bald eagles started dying off faster than campaign promises in February. 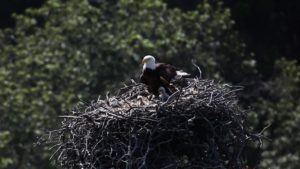 Of late, the news has been nothing but good. Officials at Channel Islands National Park recently announced that 24 bald eagle chicks have fledged from nests on the Channel Islands, making for the most successful breeding season since recovery efforts began over 35 years ago. This new young life is spread across the Channel Islands. Chicks fledged from nests on Santa Cruz Island, Santa Catalina Island, Anacapa Island, San Clemente Island and Santa Rosa Island (San Clemente and Catalina aren’t part of the National Park). It’s a remarkable comeback. For a short-term perspective, it wasn’t until 2006 that the first bald eagle hatched naturally on the Channel Islands, ending a dry spell of over 50 years. That first victory actually began in 2002 with an innovative reintroduction program (repeated in 2006) that saw biologists release a total of sixty-one young bald eagles on the northern Channel Islands. It’s been a long process, conducted in world-wide view (the Park’s bald eagle nest webcams are wildly popular; offering a real-time look at the majestic birds) and out of sight. A painstaking, and often sweaty-knuckled effort too; large trees are scarce on the islands, so the eagles often nest high on cliff faces. Fortunately, wildlife biologists and researchers tend to be spry sorts. 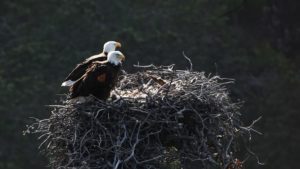 Take a chance at your own live bald eagle sightings by booking a trip to the islands with Island Packers. Even if it doesn’t work, island foxes, dolphin, and sweeping seascapes make for fine consolation.

Bald Eagle Breeding in Full Swing on the Channel Islands