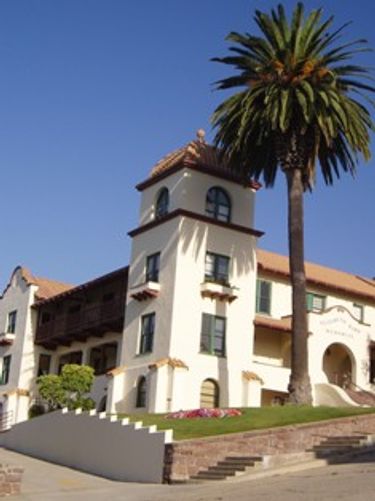 Opened on January 1, 1902, by brothers Senator Thomas R. Bard and Dr. Cephas Little Bard as a memorial to their mother, the Elizabeth Bard Memorial Hospital is Ventura’s only remaining Mission Revival building. Located on a hillside just two blocks east of City Hall, the structure, with it’s arched loggia, scalloped parapeted gables and domed bell tower, stands out as one of the finest works of well known local builder Selwyn Lock Shaw. Cephas Bard, who came to Ventura in 1868, is said to have been the County’s first American doctor. He was also the first patient to die in the Bard Hospital in 1902. The building, which has been rehabilitated for use as offices, was designated a historic landmark on March 8, 1976.