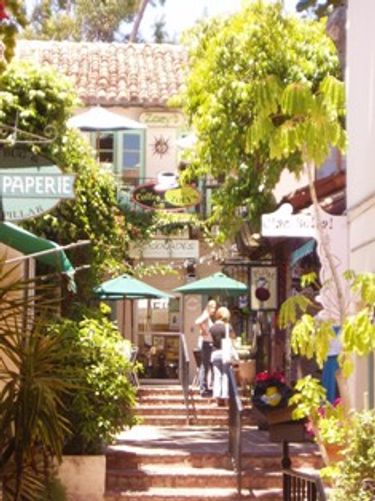 The El Jardin (Garden) Patio building was designed as one of the earliest outdoor malls in Southern California. The shopping court was very popular in the 1920’s, but El Jardin appears to be the only example built in Ventura. The two-story structure, with shops and offices opening onto an interior courtyard, remains basically unchanged from its original design. A large archway on Main Street leads into a well landscaped courtyard built on three levels. The wood trimmed stucco building has large multi-paned arched windows, wrought iron railing and lamps, carved wooden spools, beams, and brackets, and mission tile. Some of the tile has been replaced with brick tile. The use of low pitched tile parapets and flush tile roof lines enhance the effect of a “Spanish Village”. In the 1950’s, the arched front entrances and side windows on the street level were removed and replaced with large display windows. El Jardin Patio was designed by the prominent Los Angeles architectural firm of Weber, Staunton and Spalding in 1925 for G. W. Chrisman and W. B. and Mary Alpin. The Alpins ran La Floresia, a flower shop on the west side of the courtyard, for many years. Their son, William Alpin, a photographer for Sunset Magazine, had his studio in the rear of the courtyard. One of the earliest tenants of El Jardin was the Jack Rose Smart Shop, which was the first retailer in town to sell off-the-rack women’s fashion. This store occupied the Main Street location east of the archway. Jack Rose, a man who believed in downtown businesses, opened his first Ventura store in 1925 and continued to personally operate a downtown Main Street store until his death in 1955. In 1948, he built the art deco Jack Rose Building on the northwest corner of Main and Chestnut Streets to house his store.