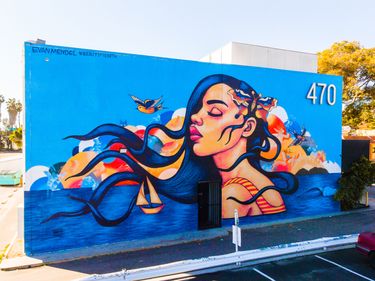 Evan Mendel is a painter/muralist born in 1988 and raised in the Valley just outside of Los Angeles CA. Evan grew up being influenced by cartoons, skateboarding, surfing, and graffiti. These influences led him to pursue his artistic ambitions further into his late teens and early 20’s, experimenting with making abstract and figurative based paintings. Without any formal art education, Evan was self-taught through trial, error, and observation. He has since painted several large-scale murals in Ventura Ca. and Los Angeles. In July 2017 Evan had his first solo exhibition at the gallery/studio space of world-renowned muralist and designer David Flores, he has also participated in group shows at some notable gallery’s in LA such as Shepard Fairey’s Subliminal Projects, as well as The Seventh Letter Gallery.